The game in Orenburg did not have any impact on the standings of the tournament. On March 4, an acting Champion UMMC took down Dynamo Kursk in Ekaterinburg, won the regular round in advance and secured the home court advantage for the following matches of the Russian Championship play-off series. By that time, Nadezhda worked its way to the third position on the standings. In spite of it, there was no place for giveaway game at Orenburg arena and eventually UMMC ended up the competition prevailing over Nadezhda for the seventh time in the ongoing season. 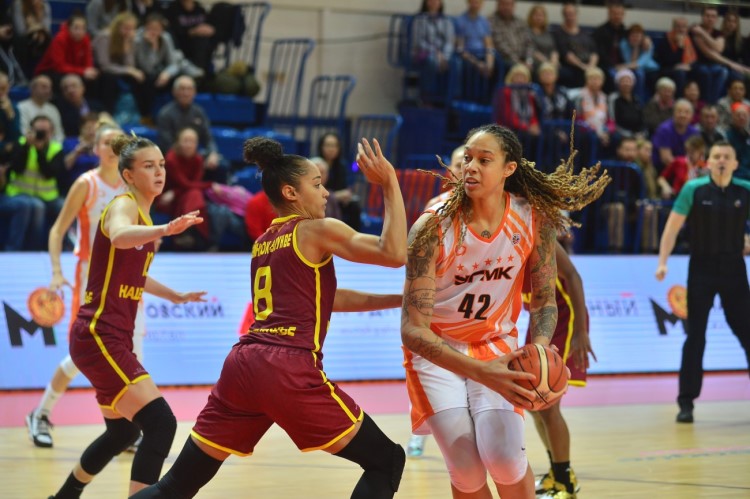 Both teams preferred to strengthen the defense and engaged the frontline players in offensive actions. The guests were more successful in utilizing this tactical scheme. By the time of the interval break UMMC duo Griner-Meesseman harvested 26 points. In addition, Brittney gathered the same number of points as the whole Orenburg team in the first quarter.

Well, both sides experienced troubles with long-range shooting: neither of 21 attempts fell down the hoop. UMMC captain Evgeniia Beliakova came out on court and was the one who opened the score from behind the arc. By the way, she was the only player who was able to do it in the first half of the meeting.

After the teams exchanged sides the «yellow-purple» fired back from downtown with a series of shots from Erica Wheeler and Anastasiya Veremeenko. UMMC replied with couple of triples in a row from Breanna Stewart. In the final quarter, the fans saw some good downtown shots from guards Karina Nizamova and Viktoriia Zavialova. In spite of it, the three-point shots did not become a key factor that could affect the game outcome.

It was Brittney Griner who had the biggest impact on the game and brought a lot of trouble to the opponents in the paint. Nadezhda came up with a half of team fouls in a futile attempt to stop her – 10 fouls, while UMMC center shooting from the free throw line converted all of them into 10 points. IAs a result Brittney toped the game statistics with 26 points and 8 rebounds.

Three more UMMC players ended up with double-figures. Breanna Stewart harvested double-double of 14 points and 12 rebounds, Emma Meesseman added 14 points and 3 rebounds, while Elena Beglova contributed 10 points and 5 assists. Raisa Musina was on her way to join the top four players, but had to leave court in the fourth quarter when she collected too many fouls. By that time, she gathered 8 points and 6 rebounds.

UMMC is having the final match of the domestic championship second group round on March 15 at UMMC arena. Meanwhile on March 11 at UMMC arena in Verkhnyayay Pyshma Foxes are going to kick off the EuroLeague Women Quarter-Final play-off series competing at home against French BLMA. The game starts at 19:00.