In the last game of the EuroLeague group round series UMMC competing at home rolled over Turkish Gelecek Koleji Cukurova and ended up with 75-point advantage. 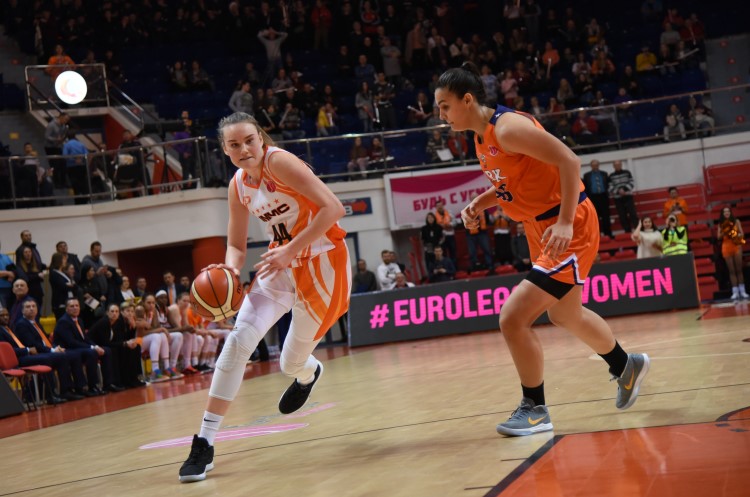 In the first quarter as well in the following 3 time periods Miguel Mendez’s team played its game: blocked any activity around its hoop while firing from all guns in offense by running forward and sharing the ball. By the time of the interval break Foxes harvested a spectacular 50-point advantage – 64:14 and eliminated any possible doubts about the game outcome. Some teams normally end up the match with the first two figures (64), while other finish the quarter with the second two digits (14).

The opponents exchanged sides, however it did not bring any changes into the game. UMMC set the game pace and totally outplayed the opponent in all game components and statistical figures. Foxes outrebounded the guests twice 52 rebounds against 22, prevailed in the assists by five times – 40 assists against 8 and as a result the final score went far beyond one hundred of points – 112:37.

Seven UMMC players collected double figures. Raisa Musina stopped within one-step from double-double – 18 points, 9 rebounds and 4 assists. Breanna Stewart showed her class with 16 points, 8 rebounds and 5 assists, while Jonquel Jones contributed 15 points and 8 rebounds. Allie Quigley added 12 points, while Brittney Griner and Emma Meesseman chipped in with 11 points from each of them. Courtney Vandesloot added 7 assists to her 10 harvested points.

For the visiting side Alexandria Bentley and Ilayda Gunner each one gathered 9 points.

- We are happy with our competition, we are happy about the game today. We shared the minutes, we shared the options, we a lot of players with big score. For me it is a record, I mean 40 assists. It is very good for us, because it is one of our first basic rules. I am happy with the team today.


UMMC finished the group round campaign and moved on to the Quarter-Finals in Group A from the top spot in order to face Group B 4th placed team. The best of 3 games series will kick off on March 11 in Verkhnyaya Pyshma at UMMC arena. Game 2 will be played on March 18. In case if it is necessary Game 3 will take place on March 25 in Ekaterinburg.

UMMC is having the next Russian regular Championship second round match on March 1 on the road visiting Sparta &K Vidnoje.