UMMC swept aside USK Praha in the EuroLeague match-up

Tonight an acting Champion UMMC competing in one of most important games of the week made a statement of intent as it defeated the nearest Group A rival ZVVZ USK Praha. The first game took place on November 6 in Prague with the similar outcome when UMMC was the one to celebrate the triumph - 74:67. It means that Foxes have defeated the Czech club twice and confidently sit on top of the Group A standings. By the way, UMMC have already secured its place in the Quarter-Finals. 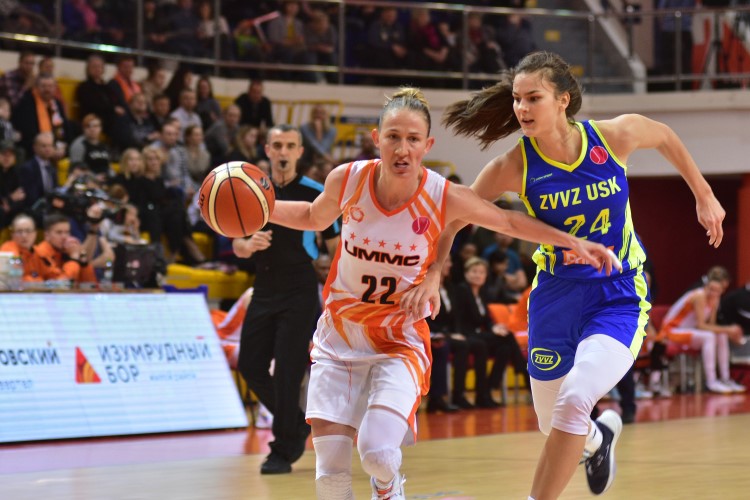 The hosts worked hard in the starting quarter and as a result captured the leadership. The series of perfect downtown shots by Evgeniia Beliakova, Allie Quigley and Emma Meesseman strengthened the home side positions and brought double-figured advantage - 27:13.In the very end Courtney Vandesloot and Brittney Griner made spectacular move. Courtney won the rebound and with one good shot from side to side passed the ball to Brittney who was running all alone toward the visiting side hoop and she got the job done in an emphatic fashion.

In the second quarter, the teams were riding up and down the roller-coaster while running back and forth for practically all ten minutes. In this game episode USK Praha forward Valeriane Vukosavljeviс produced a great display and contributed 10 points for the visitors. Home side center Jonquel Jones stood up for the «orange» team to face the Czech challenge. In spite of the wide rotation, UMMC was able to overpower the opponent only in the end of the period. Foxes added 3 more points and left the court for the interval break with comfortable +16-point leadership - 48:32.

The game picture did not change after the opponents shifted sides. In the third quarter, UMMC was controlling the game with forward Emma Meesseman playing the first violin and scoring 11 points after 10 minutes on court. Well, during the same time period the Prague team was able to collect about the same number of points. No one expected, but it was Czech guard Veronika Vorackova who harvested the bulk of point in the game episode.

Foxes kicked off the final quarter with +20 - 70:45 and were able to increase the advantage for a couple of points, but only in the very end. Twice Courtney Vandersloot and Allie Quigley shared the ball to bring UMMC extra points and widen the score gap to 27 and 26 points - 82:55 и 85:59. However, in spite of players’ shortage the guests were fighting fiercely and showed some good action competing for the rebounds. Eventually USK Praha prevailed in this component and ended up with 23 offensive rebounds. Nevertheless, they could not escape the second defeat in Ekaterinburg.

For the twenty-first time in its history, UMMC celebrated victory against USK - 88:65. UMMC remained unbeated and out of reach by USK. Since 2003, the opponents met for 25 times. USK came on top in 4 matches, however never was strong enough to overcome Foxes at home in Ekaterinburg.

For the guests Cristina Ouvina scored 14 points, while Brionna Jones and Valeriane Vukosavljeviс each made a 12-point contribution.

We played a good game. It is not a real game against USK, because they had to leave 2 important players at home. If we meet once again in the Final Four, I hope, it would be a different game. They are a good team who know how to run, play first fastbreaks and second fastbreaks. Without players, it is very hard to do it. They had only 7 players in the rotation and it is not easy. We had much more players and it was one of the key moments. They also scored 23 rebounds and it is an incredible mark for the game as we had tonight.

UMMC is having the next EuroLeague match on January 28 in Ekaterinburg. Foxes are about to face TTT Riga from Latvia on the DIVS arena main court. The game starts at 19:00.

By that time Miguel Mendez’s team have another challenge to face on January 25 at UMMC arena. Foxes are having the first round match of the domestic regular tournament against Sparta&K. The game starts at 13:00.