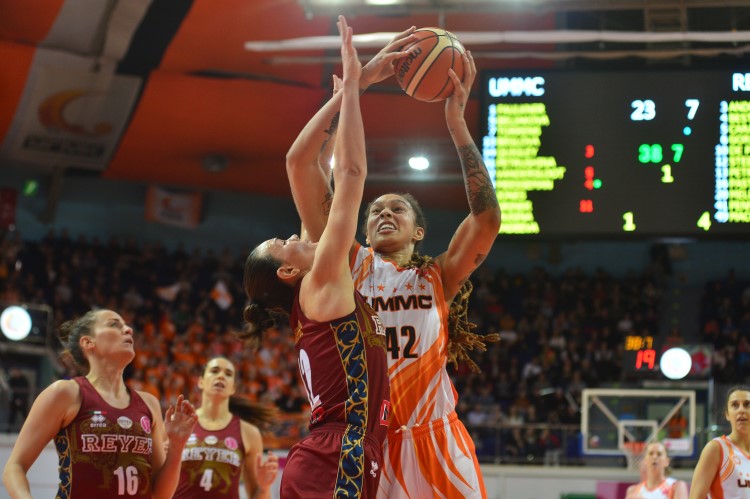 Since the first seconds, the hosts gave the game a fortunate start. UMMC was effective in defense and after 4 minutes on court came up with confident offensive run – - 9:0. It was only the beginning. By the end of the first quarter, the hosts completely captured the leadership – 29:7. It provided the coaches with the possibility to make different rotations in order to keep high game pace. By the time of the interval break, almost all players were involved in the game actions and had an opportunity to make shots and collect points. In addition, wide rotation did not affect the situation on court that was stable since the first period with UMMC increasing its dominance. By the time of the interval break UMMC collected a 37-point advantage – 53:16.

The score difference overwhelmed any kind of actions from the visiting side. The Italian offense seemed to be disoriented and lacked internal fuel. On the other hand, Foxes showed good team effort sharing the ball in order to keep on scoring points.

After shifting sides, Giampiero Ticcchi’s team tried to initiate a rescue operation in order to avoid an imminent disaster. Guests added aggression in defense, covered the perimeter under the hoop, came up with a series of fast breaks and mobilized all team resources. However, these efforts were not enough to change the character of the game. The visiting side won a couple of points in the last attack, but the game ended with UMMC taking 97:44 win.

Like in the previous game UMMC center Brittney Griner headlined and came up with 22 points. One more double-double came from Jonquel Jones who collected 11 points and 10 rebounds. Maria Vadeeva was not far away from double-double with 13 points and 9 rebounds. Emma Meesseman harvested 10 points; Courtney Vandersloot added 9 points and 4 assists. UMMC captain Evgeniia Beliakova was one hundred percent efficient and gathered 6 points, 4 rebounds and 3 assists.

- Good game for us. We played very concentrated, stayed focused. We played our basketball and it is the most important thing for me. Played together in defense, everybody played good defense, not only man-to-man defense, but also we played like a team. In offense, we had like 28 assists, 19 in the first half. So, we shared the ball. It is one of the top priorities for us. It is not easy for a team with a lot of good players to play with the others and share the ball. I am happy with that. So, we keep on going, now we have to think about the next weekend.

We followed our game plan. We tried to put out of the game Jolene Anderson and other good players. We did it, but in the second half, they fired with their Italian players – Pastore, De Pretto, Macchi and others. They played with the heart, showed good effort. They pushed the team forward making it difficult for us to keep the rhythm. But in general we are happy with the outcome.

UMMC is having the next EuroLeague match on January 22 in Ekaterinburg against one of the major Group A opponent – USK Praha. Meanwhile Foxes are having the next domestic championship game on January 19 at home at DIVS arena against Enisey Krasnoyarsk. The game starts at 17:00.