An acting Champion UMMC opened the EuroLeague Women second group round celebrating one more win. Tonight competing at home Foxes took down Belgian Castors Braine for the second time in the season and ended the match with another hundred of points on the scoreboard. 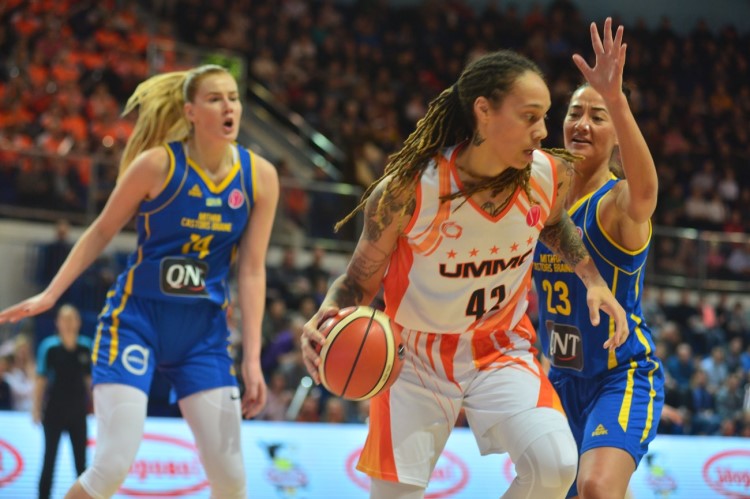 The team from Belgium was competitive only in the beginning of the match. Allie Quigley, Emma Meesseman and Evgeniia Beliakova came up with a series of successful downtown shots and provided the backbone for the confident run. UMMC frontline players followed the example. Griner-Jones-Vadeeva trio worked well in the paint to make their contribution. As a result, after 15 minutes UMMC stretched its leadership into double-digits - 36:18.

It was high time for Frederic Dusart to take available time-outs and it helped his team to cool down the «orange tornado». By the time of the interval break the guests forced Foxes to make mistakes and scored easy shots. Kourtney Treffers did a great job for the «yellow-blues» and harvested 10 points. The home side fired back with Jonquel Jones who stopped within few points away from full double-double – 11 points and 7 rebounds.

Miguel Mendez’s team captured the leadership in the first half and it was not going to stop in the second half. Home side kept on increasing its advantage with every next quarter. Foxes set the game rhythm and pace dictating its will to the opponent. Miguel Mendez even let Tatiana Petrushina who is recovering from her injury on court for a short period of time. After the game, the Head Coach said:

-Tatiana pushes herself. She try to be ready for a very important game that we are having the next weekend in order to be a part of the team.

However, the guests from Belgium should be credited for what they did. They lost one of their best player – Celeste Trahan-Davis. In spite of it, the Champion of Belgium played very aggressive, with great energy during all 40 minutes. However, it did not keep them from suffering a defeat. The reigning Champion once again showed good team effort and was strong enough to take the game all the way to the victorious win. In addition, Foxes got an extra bonus from the fans in the end when scored the third triple in the ongoing season
- 101:71.

Emma Messeman top scored with 23 points and 8 rebounds, followed by double-double from Jonquel Jones – 19 points and 10 rebounds. Brittney Griner ended up with 13 points, while Maria Vadeeva and Allie Quigley each netted 11 points. UMMC Captain added her 10 points to the team results.

For the visiting side Shaqwedia Wallace showed the best result with 16 points. Few players got double-figures. Kourtney Treffers collected 14 points, Mariona Ortiz got 10 points and 9 assists, while Egle Siksniute contributed 10 points and 9 rebounds.

I know for experience that this kind of games is not easy to play. The last game before Christmas time and the first game after the holidays. Even more for us, because we have an important game this weekend. Part of the team tomorrow go home to enjoy the holidays. Important part stays here practice for this important game. I like my players, because tonight they played like a team. Like always, 5 or 6 players have double-figures. It is very important to share the ball and play team style.

On Sunday on December 22 UMMC is facing local Dynamo in Kursk in the Final match for the Russian Cup.