UMMC got the second hundred in the season

Tonight at DIVS arena, an acting Champion competing in the Russian Premier-league came on top against Dynamo Moscow and for the second time in the ongoing season harvested over hundred points in one match. Foxes scored the first hundred in the previous match. It was one of the EuroLeague Women group round games that took place in Turkey. 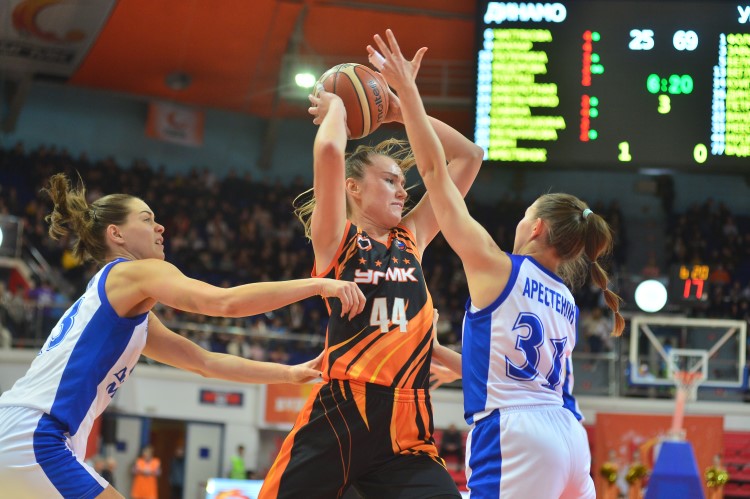 Facing the Premier-league underdog UMMC rapidly ran forward. Foxes built a brick wall of defense and used it to initiate different activities in offense. UMMC generated its advantage that kept on rolling forward like a growing snowball. By the time of the interval break in became evident that there were no chance for the «white-blues» to escape a total defeat that night - 61:25.

After the opponents changed sides Miguel Mendez’s team in spite of a confident leadership kept the pace and in the third quarters allowed the guests to score only 8 points. By that time the teams were separated by a 55-point gap - 88:33

In the final time period the score difference between the competitors reached its maximum of 66 points. The final buzzer meant one more Premier-league win for UMMC - 118:54.

- We had a good game tonight. We could stop the opponent in defense, however this time I really enjoyed to see the way we acted in offense. In the last game, we made 39 assists in attack. Tonight we had 37. I am glad about these figures. It means that we share the ball and demonstrate a really great team basketball.

UMMC is having the next match on December 18 at DIVS arena. Foxes are about to continue the EuroLeague campaign and will face Belgian Castors Braine in the EuroLeague second group round. The game starts at 19.00.