An acting domestic and EuroLeague Champion UMMC continues its long on the road series of games. After Foxes saw off MBA Moscow UMMC left to Venice in order to compete in game three of the EuroLeague group round and record one more win against local Reyer Venezia. 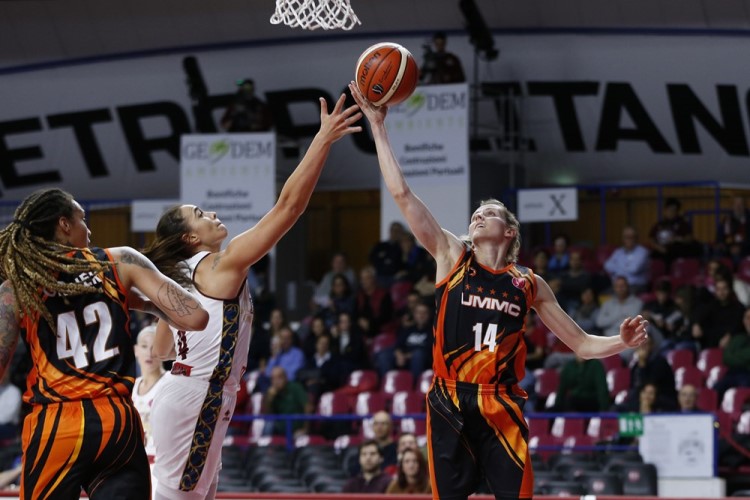 The opponents kicked off the starting quarter colliding face to face in a series of actions working through the front line players. Brittney Griner was playing solo for UMMC, while Anete Steinberga was playing the first violin for the home side. After the first ten-minute period, UMMC made the first major run - 9:0. Maria Vadeeva collected the bulk of points (5 points) and scored the first team triple - 29:23. Looking forward it should be noted that UMMC center demonstrated perfect from the floor shooting and missed only one free throw in the very end. Later Allie Quigley contributed the second triple - 46:33. In the very end, the fans once again saw Brittney Griner competing against Anete Steinberga. Within a few minutes to play in the second quarter, Brittney added few successful shots to increase the UMMC’s leadership to 15 points - 48:33. The home side leader used the last seconds to chip in 2 more points in order to cut down the score difference and bring Reyer closer to the leader - 48:37.

The second game half went on under the visiting side total control. It was one of the most fantastic episodes when Courtney Vandersloot made a long range shot to Brittney Griner in the three-second zone. Umana Reyer players tried to stop the «orange storm» in their perimeter and gathered too many team fouls. Eventually in the third quarter, they harvested the same number of fouls as they did in first two periods. The Italians got on fire in defense and raced forward in offense. After one of the successful downtown shot from Martina Bestagno the hosts were able to approach the leader within 8 points - 52:44. Well, it was high time for the visitor’s captain to do some good action. Evgeniia Beliakova twice found the backdoor in the opponents’ defense and walked down the Italian side paint. For the first time she shared the ball with Emma and later scored 3 points in one attack after she made a perfect game shot and added nice free throw - 61:49. The next 6 points came from Jamierra Faulkner, followed by an assist to Griner that became one of her 22 points - 71:52.

Both sides started the last quarter collecting personal fouls, while the players from both sides got tired and the game turned into a tough contest. Emma Meesseman was first to come up with few points and stretch the «orange» team’s leadership to 22 points - 74:52. In spite of a deep gap, Giampieros Ticcchi’s team was not going to wave a white flag and the competition continued. At some point Jolene Anderson and Elisa Penna fired at the visitors - 79:60 and with almost 4 minutes to play Miguel Mendez decided to take a time-out. One-minute pause was useful only for an acting Champion. In the remaining time, the hosts came up with only one shot from the team captain, an experienced player Laura Macchi who used to play for the national team of Italy and Famila Schio. It was UMMC captain. Evgeniia Beliakova who made two successful free throws and ended the game with UMMC celebrating one more win - 86:61.

UMMC center players made the best contributions of points. Brittney Griner came up with 22 points, Maria Vadeeva ended the match with 21 points and 9 rebounds, Emma Meesseman added double-double of 13 points and 10 rebounds.

The opponents had Anete Steinberga who netted 19 points and Elisa Penna finished with 11 points.


After three EuroLeague matches UMMC demonstrates flawless game and shares the Group A top position with Czech USK. On November 6 both clubs are about to meet in a face-to-face combat in order to find out who is stronger enough to hold the top position. Meanwhile the Foxes are about to have the next match of the domestic Premier-league championship in Vidnoje against local Sparta&K.