Two weeks ago in Ekaterinburg the competitors kicked-off the European season by the SuperCup Women match. An acting EuroLeague and Russian Champion UMMC celebrated victory in the title game- 87:67. Tonight in the first EuroLeague home-court game UMMC swept aside the guests from Orenburg. 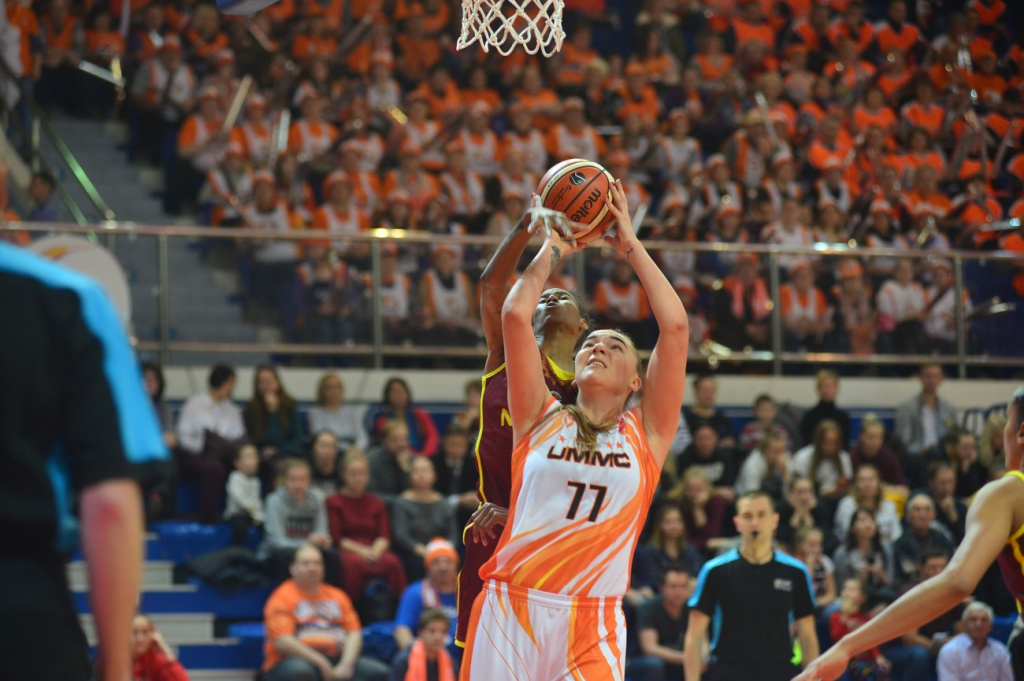 After the SuperCup Women Final game UMMC was considered as the most likely winner. In the second half Foxes proved the Champions’ class and left for the interval break with 28-point advantage - 57:29. By the end of the third quarter, the hosts widened the score gap up to 34 points - 67:33. The guests tried hard to return on court, but were taken down by an excellent performance from UMMC center Maria Vadeeva multiplied by efficient home team interaction. The Foxes kept a comfortable supremacy and controlled the game until the final buzzer.

Maria Vadeeva was also riding in top gear as she ended the match with the double-double of 30 points and 11 rebounds. Emma Meesseeman fit in great. WNBA Champion and MVP came to Ekaterinburg on the eve of the match; however, it did not stop her from contributing 11 points and 5 assists. Allie Quigley was one-step away from her double double with 11 points and 7 rebounds, as well as Courtney Vandersloot who did the business in the backcourt with 8 points and 10 assists.

Yvonne Turner was the driving force for Nadezhda and ended up the match with 16 points, while Nayo Raincock-Ekunwe added 10 more points.

- We had a good game. We are still not complete. I think was the first half was good and in the second half we had to stay focused and finish the game. We won it. It is the second EuroLeague game and a good way to start the season. If we going like this and just keep on growing I look forward to the season.

- We are happy to see the way we are growing. I think we had a very good first quarter and finished the game on high note. We used the second half to keep our rhythm, our rotation. We are very happy. It is one more game and one more opportunity to get better.

Every team try to do different things against us, different defense and to put difficulties to our offense. Nadezhda is a great team with good Russian and international players, with very experienced coach. No wonder they came back. I wish them best in the future. We are happy when Russian teams play good basketball.

After 2 games of the EuroLeague group round UMMC demonstrated flawless result and tops Group A standings.

An acting Champion is having the next EuroLeague match on October 30 in Venice. Meanwhile Foxes are about to have the next game on October 27 in Moscow competing in the regulate Premier-league match against local MBA.