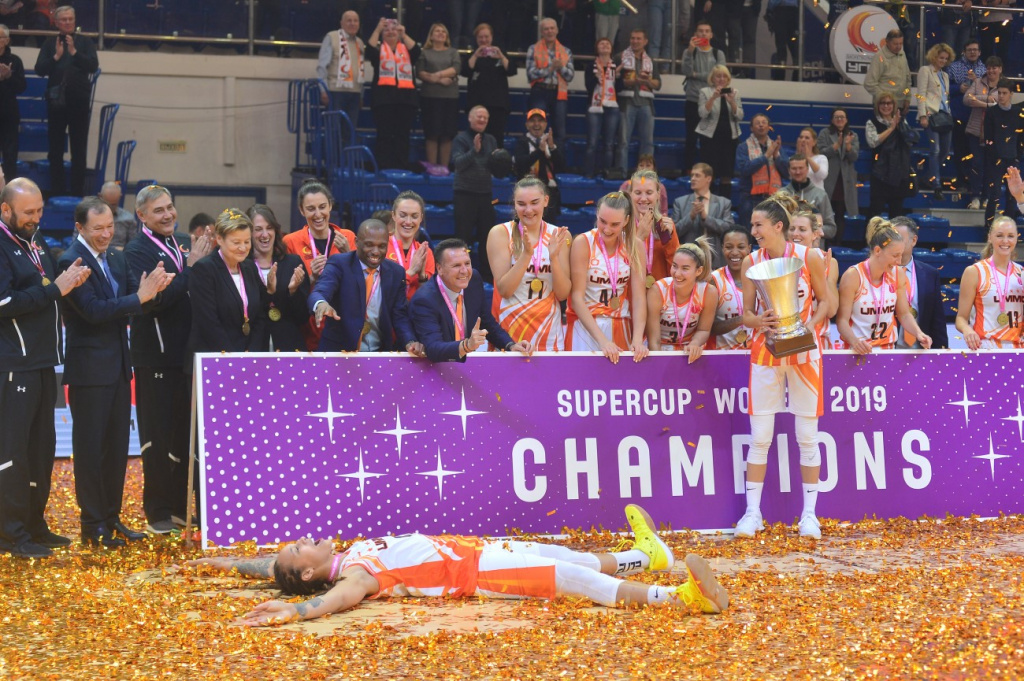 Unlike its opponent, UMMC approached the first title game far from its best shape. Tatiana Petrushina and Alba Torrens only get ready to return on court. UMMC center Natalia Vieru is also recovering from some minor injuries. Two more UMMC leaders Jonquel Jones and Emma Meesseman in the evening were about to cap off with the WNBA Final match. Nevertheless, it could not stop the Foxes from extending their list of records by winning the SuperCup Women competition for the fourth time.
Earlier UMMC won one-match continental tournament in 2013, 2016, and 2018.

It seemed like the game between two European champions started with the hosts having stronger positions. Allie Quigley kicked of the match with an excellent triple and the home side fans were ready to witness another easy win. Erica Wheeler answered the challenge. Nadezhda’s guard propelled her team forward and at some point in the first period outscored Brittney Griner.

Anastasia Shilova joined Wheeler showing intense downtown shooting, while Nayo Raincock-Ekunwe did her job in the paint. Thus, Georgios Dikaioulakos’ team caught the game wave and drove forward. However, it continued not for long. UMMC Captain Evgeniia Beliakova was first to pour down a triple followed by a series of shots from Courtney Vandersloot that forced the game to go back on track. UMMC left the court on the leading positions.

In the second quarter both teams stress-tested each other looking to the breaches in the defense. Neither could find the way to come up on top, so they left the floor for the interval break with even chances. However as soon as the break was over everything turned upside down.

In the third quarter, UMMC center Maria Vadeeva come up big and made her presence felt. She messed up the first half and collected too many personal fouls. However, in the second half she scored 11 points in 7 minutes and ended her performance with 13 points and 5 rebounds.

Nothing could stop UMMC in the final quarter. Raisa Musina was fiercely fighting for the rebounds to add more points. The score gap kept on growing deeper and in the end Miguel Mendez let UMMC Junior players Viktoria Zavjalova and Dayana Dinza Ernandes on court. They did not score points but made their contribution that allowed UMMC to rack up the fourth SuperCup Women title.

UMMC center Brittney Griner was on fire and finished the contest with a sparkling double-double of 28 points and 11 rebounds. Evgeniia Beliakova grasped 17 points, while Courtney Vandersloot dished 10 assists.

For Nadezhda, Erica Wheeler missed one assists to gather a double-double – 20 points and 9 assists.

In a few weeks, both clubs will once again meet in Ekaterinburg competing in the EuroLeague Women Regular Season. Foxes are going to have the first match of the European tournament on October 23 at DIVS Arena. The game starts at 19.00.